Back to the Future

Those of you who know me, know that I have spent the last 12 months procrastinating about what gauge I should build the railway. I have struggled to make a decision between On30 and On3.

I began modeling in O scale with On3 around 7 years ago. I had visions of modelling the Marshall Pass line of the Denver & Rio Grande Western in Colorado. At the time it was very expensive and took lots of room which I didn't have but I built up a large collection of loco's and rolling stock.

It was a chance meeting with Geoff Nott builder of Red Stag Lumber company & Muskrat ramble, who showed me what he was doing with modelling Australian scenery. Seeing his beautiful modelling awakened an urge to model the landscape I knew best - Australia.I have strived to achieve the standard Geoff sets but I still have a long way to go. At the same time On30 was starting to become popular and has the advantages of needing less room and a lot cheaper so it was down that road I went.

I built the first two modules of the Bogong & Geehi for the Australian Narrow Gauge convention held in Albury in 2007. Not long after I added the pride of my fleet, my garratt. While it looks great it has been an erratic performer.

To cut a long story short I had a couple of years away from the hobby and when I came back I had the idea of shifting the Rio Grande to Australia to use the On3 I had sitting on the shelf. While the On3 runs beautifully it has never quite looked right.

I have spent a lot of time trying to work out what I really want from a model railway and at the top of the list was reliable running qualities and it must look realistic. Even though I am freelancing I want my railway to look as if it really existed. Rio Grande trains where never going to cut it and the work to change Australian prototypes to On3 was more work than I want. My friend Bernard Snoodyk came and helped me tweak the garratt which has improved its reliability no end.

So in the end the only thing stopping me changing back to On30 was that I am going to loose the time and money spent changing to On3. The moral of the story is that its much cheaper to work out what you want before you spend your money. I also knew a long time ago that I had made the wrong decision but kept putting off correcting it which again cost me time and money.

So this weekend I will be pulling out the On3 track and relaying the On30. Thankfully I hadn't sold off to much of my On30 but I have set myself back quite a bit. At the end of the day though, I have to be happy with what I am doing because a hobby is supposed to be about having fun.

Could I interest anyone in some almost new San Juan On3track ????

Posted by Murray Scholz at 5:15 PM No comments:

This weekend was a very productive time for the Bogong & Geehi. I decided to build one of the peninsula's that extend into the room. As my friends know I am much happier working with steel than wood for my bench work.With this extension I decided to slightly change how I have been doing things. To this point in time I have been making the layout modular, which is handy if I want to move the layout or make changes. The disadvantage of modular systems is that it is harder to build odd shaped modules and there is a lot of extra work.

For this peninsula it needed to vary in width quite a bit as the turn back curves take up a lot of space. I also wanted the area underneath to be clear as I want to have a lounge suite in the room for the kids to come and watch TV while I am working in the shed. I have made some changes to the trackplan which shifted Mt Bogong onto the peninsula with the hidden staging underneath. The staging will be part of a return loop and I will no longer have continuous running.

Putting this all together with modules was always going to be difficult so it didn't take me a lot of convincing to make this peninsula a permanent construction. It took longer to design than build but I have been able to achieve all that I wanted. I used 100mm x 50mm for the uprights and then welded 50mmx 50mm for the cross members. 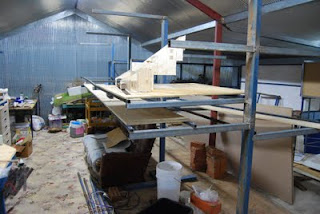 Apologies for the quality of the photo but it shows you what I have done better than I can explain. The level on the lower left is the staging with Mt Bogong above. When completed you won't be able to see Mt Bogong from this angle as it will be behind a backdrop. The area in front of the upright will be the turnback curve and I have yet to build the benchwork for it.

After I had finished building on Sunday afternoon I couldn't help myself, I had to see how the Mt Bogong mining company was going to look in place. 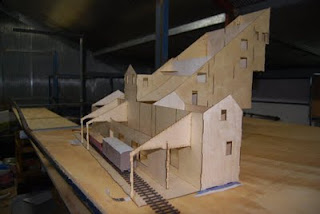 Again not a great photo, but I am happy with how the model looks. While it is big it doesn't overwhelm the area.
All in all, a very satisfying weekend.
Cheers Murray
Posted by Murray Scholz at 8:23 PM 2 comments: