An addition to the toolbox 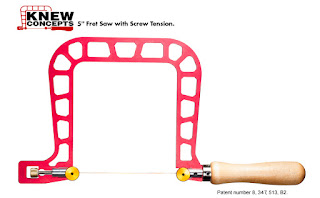 I recently purchased from Australian Jewellers Supplies a new jewellers saw made by Knew Concepts. What makes this saw different to my old saw is that it has a tensioning nut that keeps the blade at the perfect tension. 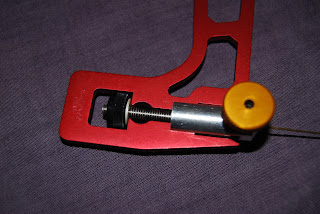 It is very easy to swap blades and then get the tension right. The big advantages of having your saw blade tensioned right, are that it's easier & quicker to cut, easier to cut straight and you don't break near as many blades.
It wasn't a cheap investment but it should last me a lifetime. I have started converting another Bachmann loco ( see more modifying locos from last year) and I am currently cutting the cab from brass sheet. With the new saw I cut the entire front cab wall out in about a quarter of the time that it took last cab and never broke a blade. Less hassles cutting makes working with brass much more fun.

Posted by Murray Scholz at 2:51 PM No comments:

To stage or not to stage?

Things have been slow on the layout at the moment. School holidays, extremely hot weather and a post harvest slump have conspired together to keep me from the shed. I have also been working on a diorama to take to the 11th Australian narrow gauge convention . A couple of weeks ago I realised how little time there is until Easter and how much work I have to yet to do, so that will be my priority for the next month or so.

While I may not have been doing much physical work on the layout I have been thinking about making some major changes. I had always planned to have some hidden staging that would allow for continuous running, but to achieve this I needed a duckunder or lift out bridge at the door into the shed. I have never been keen on the idea, but haven't been able to work out how to live with out it.

I recently listened to a podcast interview of Doug Gurin on the The Model Railway show (episode 45) were he talked about your layout telling a story. That interview set me thinking about my layout and I realised that most Australian narrow gauge railways are simple affairs with their main yards at the interchange point and at the terminus at the other end. This is how the Victorian narrow gauge lines are as well as the North East Dundas tramway and Mapleton tramway. If I was to put an interchange on my layout, I would no longer need staging or a duck under to get to it.

The advantages of going down this road would be no duck-under, no hidden staging and the ability to have a few standard gauge pieces of rollingstock to demonstrate the size difference. I am keen to show the difference between standard gauge and narrow gauge as many people have trouble understanding how much smaller narrow gauge trains are.
I also realise there are some negatives. With no staging there is a good possibility of the layout being crowded with too much rolling stock. I think if I make the changes I will need discipline. The Victorian lines usually only had 2 or 3 locos on a branch at any one time so the logical conclusion is that if I have more  locos than that they shouldn't all be on the layout.
There is also no ability to have continuous run. I have had continuous run as a must have on my list of layout requirements for a very long time. I realised a few weeks ago that I haven't had a layout with continuous run for nearly 7 years now so I think if I have survived this long I can survive a bit longer without it.
A friend raised the point that without staging operations could be quite limited. I do have to agree with him, but it is a narrow gauge railway. Operations on the Victorian lines traditionally operated from the interchange station to the end of the line and then back. Depending on the line they did this daily until the end of World War II and then quickly cut back to as little as weekly on all bar the Gembrook line. If I lived in an area that had lots of modellers for an operating session I think I wouldn't be considering these changes. The reality is that most of the time it will only be me operating so that should work ok. I do have concerns that I may get bored with only one or two trains a session.
Another concern I have is that I may be making the layout too crowded and could loose the open empty country look that has been my goal. I am a great believer in less is more and  have tried to have reasonably large areas that have little detail between small towns. 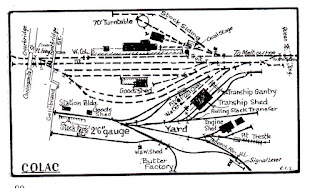 To choose a track plan for the interchange yard I have again looked at the Victorian lines. The two that appeal are Wangaratta and Colac. Wangaratta is a compact yard but isn't as interesting as the one at Colac.  The Colac yard does fit in the space I have, but if I flip it top to bottom it fits a lot better. That would mean the standard gauge yard would be in the aisle. This would mean very little of the wider gauge tracks need to be modeled and I wouldn't need any engines. 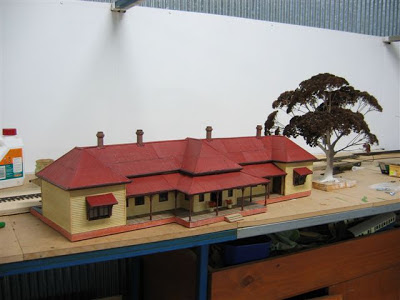 The one feature of Wangaratta I want is the narrow gauge spur in the forecourt of the broad gauge station. If I flip the broad gauge yard but leave the narrow gauge yard as it is I can achieve that. I want to put the large station I built a few years ago as the interchange station building.I know that all sounds complicated and it took me an afternoon of laying out points and flextrack to see what would work.
I am keen to have feedback on this idea before I commit to it. So if you have an opinion either positive or negative feel free to comment.
Cheers Murray
Posted by Murray Scholz at 6:08 PM 8 comments: