March has been a quiet month on the Bogong & Geehi. Work has been very busy and a couple of trips away for the month has meant that not as much has been happening as I would like. I have also been in a bit of a flat spot with the railway as several projects haven't worked out the way I had hoped.

One of the best ways to get motivated is to spend some time with some train mates . I had a very enjoyable weekend in Melbourne attending the Southern Forests narrow gauge meet a few weeks back. 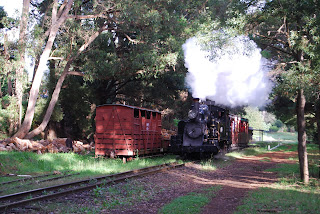 The evening before Gavin Hince held an operating session on this On3 North Coast Railroad. It is always great to visit Garvin's layout and see what changes he has made. Thanks Gavin for the invitation.
The organisers of Southern forests arranged for Puffing Billy to a run a special train for attendees. It was also a great opportunity to photograph some of the Victorian Railways narrow gauge equipment. 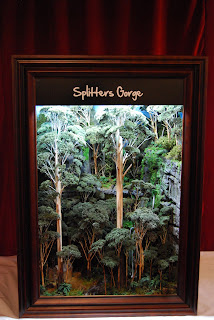 All the presentations were excellent but the two stand outs for me were Michael Johnson's history of his freelanced railway and Dan Pickards tree building clinic. Michael has developed a history that includes freight traffic and how it changed over time. The different industries affected motive power and rolling stock requirements and has helped him develop a realistic roster.

Dan is a very talented modeller and his skills at creating realistic Australian scenery are plain to see. Seeing his Splitters creek module in the flesh was great and I am keen to try his techniques for eucalyptus. Dan has covered building his module on his blog Somewhere on the workbench He also has a great post on the Southern Forests weekend.


I finally found some free time this weekend to do some work on the railway. I am keen to get started on some scenery around my pin truss bridge. I needed to build some abutments for the bridge to sit on before I could start creating the landforms.I decided that if the bridge had been an upgrade from a wooden bridge in the 1920's that the abutments would be made of concrete. I began by making them out of wood. It took a couple of attempts to get all the angles right but this is what I ended up with 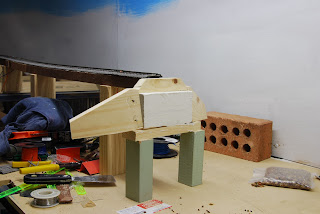 Nothing glamorous but the right shape. To get the concrete effect I like to use plaster. I had some cornice cement left over from a recent project.It is ideal as it comes already mixed, sticks well, drys quickly and can be spread thinly. I just trowelled it on with a spatula. 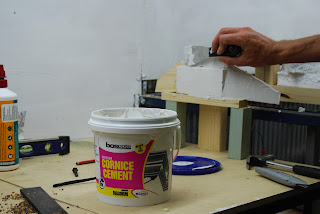 I leave the plaster for about 15 minutes, and then use my finger dipped in water to smooth out the finish 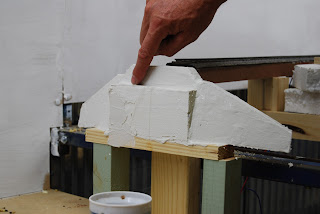 After the plaster had dried, I stained it with a wash of Polyscale aged concrete acrylic paint that I diluted with water. Here is the end result with the bridge re-installed. 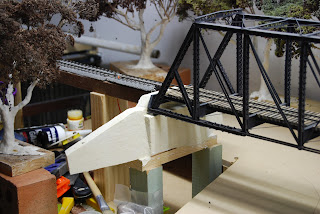 I have also installed a piece of MDF at the height of the river. I also spent a bit of time moving trees around, to get an idea of how the completed scene might look.﻿ 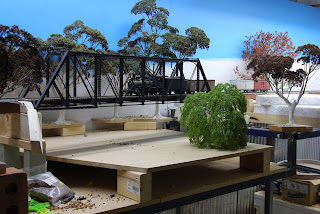 I am happy with how it looks but I will need more trees. I think it will need at least another two willows to help hide were the river meets the backdrop as well as quite a few smaller gum trees. All in all a very productive weekend.