IT has been awhile since I last posted a report on the Bogong & Geehi. I would love to say that I have been madly working on the layout and I have lots of new things to show you.... but I would be lying if I did. Unfortunately life has been ridiculously busy over the last few months. Autumn is a very busy time on the farm with us sowing our crops. My wife has been travelling a lot for work and I have had a couple business trips as well. Add to this weekend sport for the kids and something has to give and that means the hobby has to take a back seat. It is right that family and business come before my hobby but the recent lack of time has meant that progress has been very slow.

This lack of action isn't all bad though. It has given me an opportunity to think about what I am trying to achieve and to review where I am at with the layout. When I started building this layout in February 2011 I had some very grand plans and some expectations that I now realise were unrealistic. I thought I would have all the track laid in 12 months and not the three years it actually took. I know I took some detours along the way but the reality of the workload of building a large layout by myself is really hitting home.

The recent inactivity has me thinking that some times less is more. It is a message that has been promoted by several blogs I read. Modellers like Trevor Marshall, Lance Mindheim & Mike Cougill have realised that time is often a limiting factor in our ability to build a layout and that a simple layout can be very satisfying. 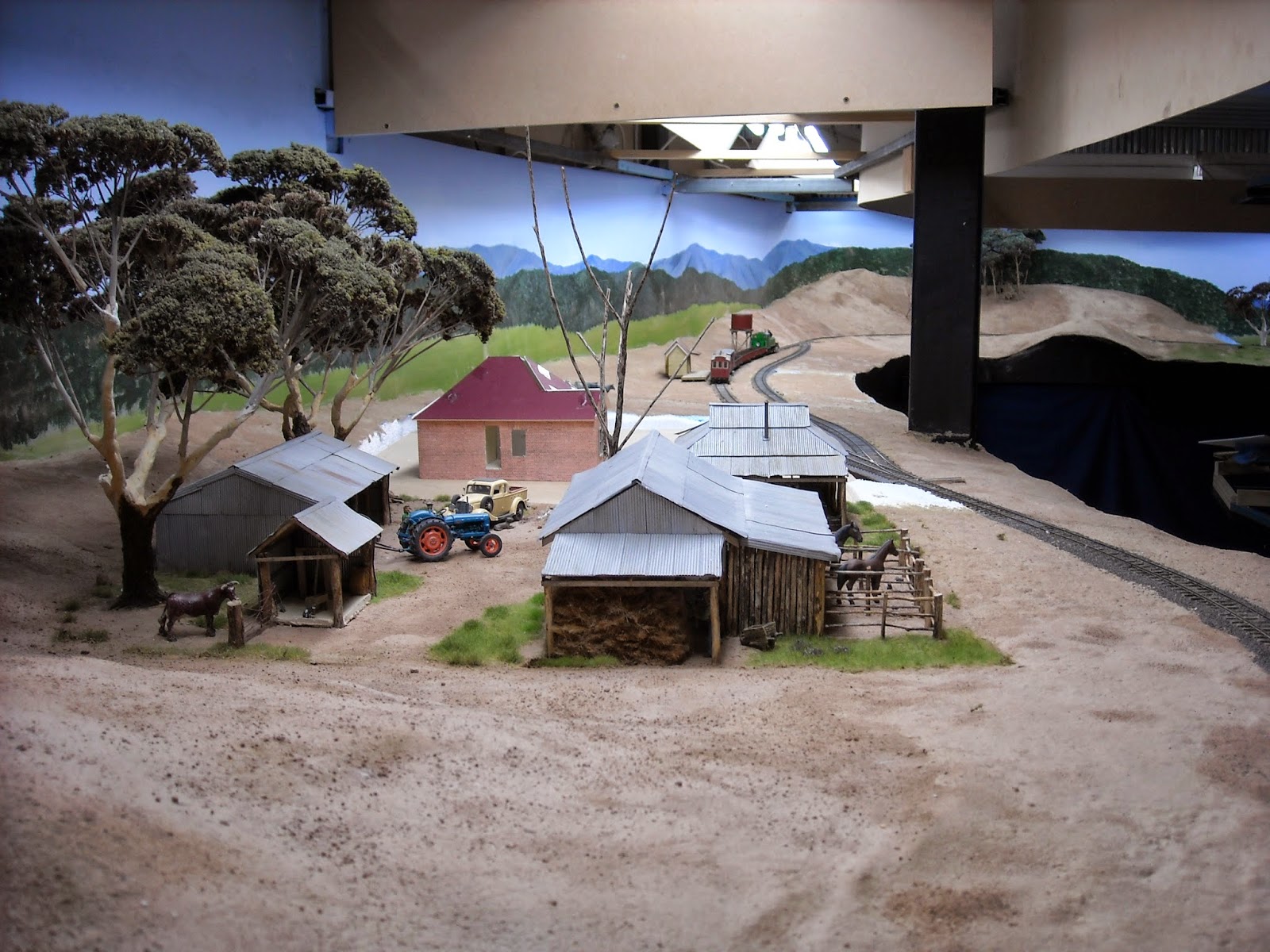 The scene above has come together reasonably quickly and I expect to finish it this winter. It won't take long to put a layer of static grass down and cover the hills with trees. The most time consuming task will be building the farmhouse. I have always planned for this scene to be reasonably empty and I am happy with how it looks. I wanted a spectator be able to stand at the end of the peninsula and feel like they are standing on the hill looking down a country valley. I had some guests this past weekend and it was a popular spot to watch the trains go by. It reinforced what I have been thinking lately that "less can be more".
Let me explain further what I mean. When I designed my layout there was lots of scenes and structures I wanted to include. With a reasonably large space it was easy to find room for lots of buildings and stuff that fills up the room. The irony is that most narrow gauge lines ran through country that was sparsely settled. Part of the attraction of modelling narrow gauge is little trains running through countryside that was reasonably empty - just like the scene above. When planning I had designed my towns to have lots of interesting buildings, in fact I need to scratch build another 60 to 70 structures to complete the layout. At the rate I am currently building there is a fair chance I will never finish the layout and that is a bit disheartening.
So what does this mean for the rest of the layout? I could make the layout smaller or reduce the number of towns but most of the heavy work of bench work and track laying is done. Rebuilding the layout would only add to my workload.
Well what if I made my towns a lot simpler? They don't need to have lots of buildings to be attractive scenes. Would it matter if the stations were surrounded by grassy paddocks? Compared to building structures scenery is a quicker and lower cost alternative. Looking through my library it more common to see emptiness than lots of buildings.
I have looked at each town on the layout to see what I need to have a satisfying layout and I have reduced the number of structures I NEED to build, to just 20. That is a number that I can achieve in a realistic time period. I can easily surround my towns with paddocks of static grass so that the layout will have a completed look a lot sooner. There is no reason that if in the future I want to add some more buildings I can't scrape away some grass and find a place for them.
So if you are still with me after this long ramble, by making the layout simpler I hope to have a satisfying layout that looks completed sooner. I want to take some self imposed pressure away so that I can enjoy myself which after all is what hobbies are supposed to be about.
Posted by Murray Scholz at 9:48 PM