I hope everyone had a great Christmas and that the New Year will be a great one. 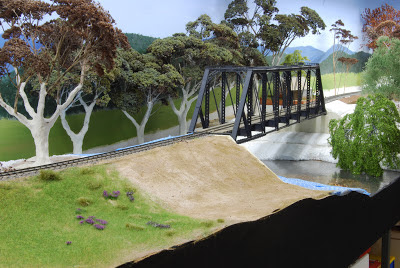 There hasn't been a lot happening on the Bogong & Geehi for the last 6 weeks as we have been busy harvesting on the farm. It was a successful harvest and we finished on the Friday before Christmas. It is always good to be finished before the festive season and after a few days catching up on some sleep I decided to venture out into the shed and do some modelling.

I have been busting to do some scenic work to try and remove the snowstorm look that most of the layout has. The first thing I do is cover the foam with several layers of chux wipes soaked in white glue diluted with water. 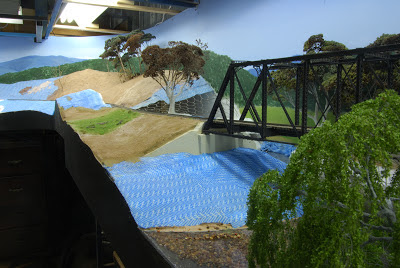 Once that has dried I have been using "mud" which is something that American modeller Mike Confalone uses on his layout showcased in model-railroad-hobbyist magazine. He has a multi part article about building his layout starting in the April 2012 issue which can be downloaded from the website.
Mike makes his mud mixing Celluclay ( a dried paper mache product) mixed with acrylic house paint and a little water. Mud is a very appropriate name as that is what it looks like. It is very good for filling holes and generally looking like soil. It is surprising how far a small mix will cover and it dries to a very hard and strong surface. While it's still wet I sift on a light coat of dry grout to make the surface look even more like soil.
﻿ 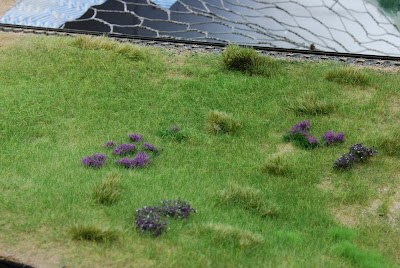 After all that had dried I just had to get out my Noch grass master and apply some static grass. I use fibres from both Heki and Silhouette. I only did a small area as I wanted to check that my technique still worked. I used white glue which has left a shiny sheen when it dried, so I will be trying matte medium next time. On my first patch I put down the static grass first and then tried adding silhouette flowers to represent Paterson's curse and grass tufts. With the static grass ﻿already down the tufts had trouble touching the ground so I tried putting the tufts and flowers on first and then adding the static grass which I think is more successful. Looking at the photos I think I need to add something like a little ground foam to represent broadleaved plants
Posted by Murray Scholz at 9:23 PM 4 comments: