A quick update to show progress on the layout.

The first thing you see as visitors walk in the door is this curve. I have been wanting to add a bridge for a long time and have finally gotten around to it. It is fully scratch built using Mt Albert scale lumber, dowel and numerous Grandt Line nut,bolt & washer castings. It is the first wooden trestle to go into the layout and I have learnt how not to build a trestle! I have another 10 bridges to build for the layout so it has been a good learning experience. I am happy with how it has ended up and the finished scene should be a good introduction to the layout.

I am now building scenery i the area around the bridge.


I have purchased a couple packs of Haskell's NQR wagons. It is nice to see some ready to run Australian narrow gauge rolling stock. They are well done and while they aren't quite as finescale as the Ian Lindsey kits, the fact that all they need is some weathering is very helpful when I am time poor. I am planning to add some more to the roster soon 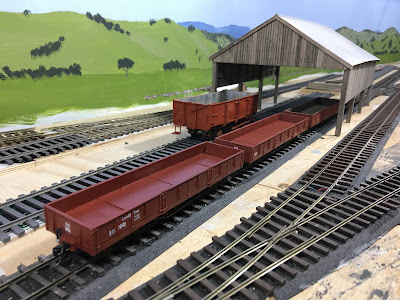 the broad gauge yard has finally been laid. at this stage I have only one GY wagon and a vrcasts oil wagon to put together, so some kits from veteran models are on the wishlist.

I hope you all have a merry Christmas and that the New year is a good one.

Cheers Murray
Posted by Murray Scholz at 10:55 AM 4 comments:

It has been awhile since my last post and I wanted to let you all know that I am still here and that  while progress has been slow on the layout there has been some modelling done.

As I have mentioned in the past I have had some ongoing issues with my sight after an accident a couple of years ago. I had surgery on my eye last year and the recovery time has been slow but thankfully after a new pair of glasses my vision is back to a pretty good level. If there is a lesson out of my experience, it is look after your eyes. Without them it can make modelling a bit difficult.

The difficulties with my sight has meant that I haven't been doing a lot of modelling. I found I got very frustrated and for awhile I just haven't wanted to work on the layout. I did keep plugging away at a project that I have wanted to achieve for some time. I have a number of the excellent AMK kits of the Victorian narrow gauge passenger cars. They have made kits for both the NBB and the NAB and I have been slowly working away at them.

I am very pleased with how they have come together 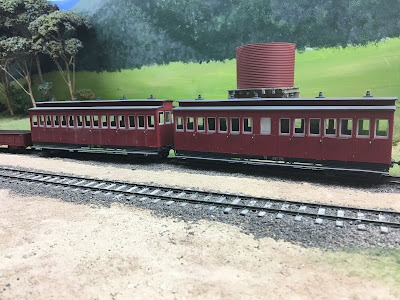 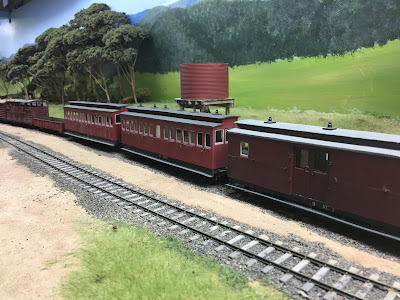 They are an extremely detailed kit that has been well thought out, and I am pleased that the long suffering passengers of Geehi & Mt Bogong now have some comfortable transport.

Fitting sound to the Garratt


I haven't been happy with the Tsunami sound decoder I had fitted to the Garratt. It just never sounded right and the whistle was totally wrong. I also had trouble with the running qualities. It seemed to short or reset almost constantly. I never did quite work out if the decoder didn't like running two motors or if I had a poor connection somewhere.

I was't sure what I was going to do about it until I stumbled across a DCC shop in the UK called YouChoos that sells Zimo sound decoders. John has a range of decoders loaded with the sounds of various  British locomotives. What caught my eye was a decoder for the OO scale LMS Garratt that Helijan released a few years back.

While the sounds are not exactly right for G42 they are pretty close as they were recorded off Bulawayo Garratts in South Africa. The decoder arrived in yesterdays mail and I installed it this morning.

I am very happy with how it sounds and to my ear it sounds far more like G42 than the Tsunami did. I can happily recommend the service from John at YouChoos.

Any way take a look and see what you think...
Posted by Murray Scholz at 6:22 PM 3 comments: 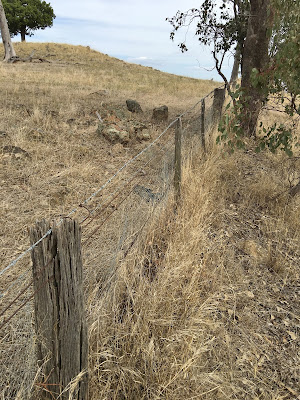 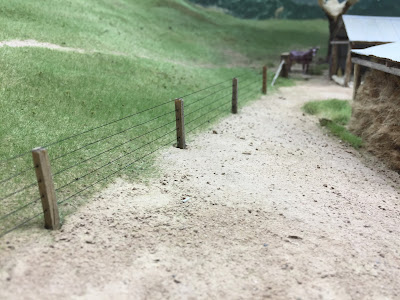 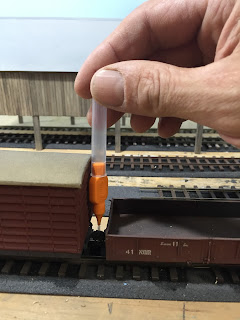 For some time I have been looking for an easy option to uncouple the Kadee couplers I use. I am not a fan of the under track magnetic uncouplers as I want the operation to be a little bit laid back like the prototype narrow gauge was. I have tried using a variety of things like skewers and brass rod but have always had mixed results.

I visited my friend Gavin Hine last winter and his On3 Colorado & Southern Clear Creek layout. I took a train for a run and when it came time to uncouple Gavin handed me one of these... 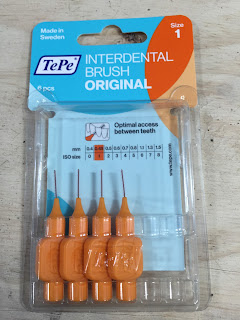 I believe he got the idea from Brian Harriman and they work a treat. They are dental brushes that have a thin wire and small bristles and they separate a pair of Kadee No5's very easily. Gavin has made his with solid handles and a small led torch to make it easier to see. I am only using the little handle that comes with the brush but I am planning to do something similar. Thanks Gavin & Brian for a great idea!
Posted by Murray Scholz at 7:10 PM 2 comments: