Progress has been slow on the layout recently. I had an accident with an impact injury to my eye about 18 months ago which has given me some ongoing issues. It was finally decided that the best option was surgery which I underwent in August. It has all gone very well but during the  recovery time I am having issues with blurriness. This is really driving me nuts as I am unable to do detailed modelling.
What I have been doing is some tasks that don't need me to see fine detail such as planting grass, 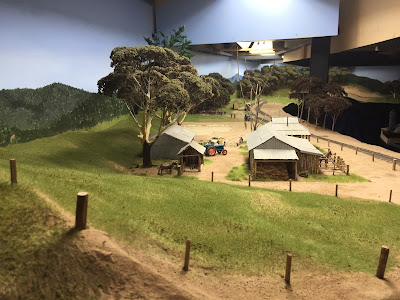 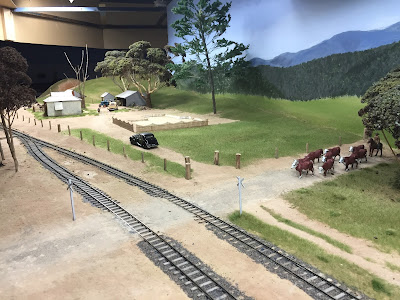 The paddocks on the farm have now got a nice green tinge to them, which I am sure the cows will like...
For my grass I like to use a minimum of 3 colours and 2 lengths of static grass fibres. I mix them in a blender with the portions slightly varied each mix to get some natural variation. For the pasture in the paddock I used 1 part 4mm MiniNatur Early autumn, 1 part 2mm late autumn, and 2 parts 2mm summer. That is shorter than mix that I usually use to represent the grazing of the paddocks. I will use mostly 4mm & 6mm for the grass on the outside of the fences. 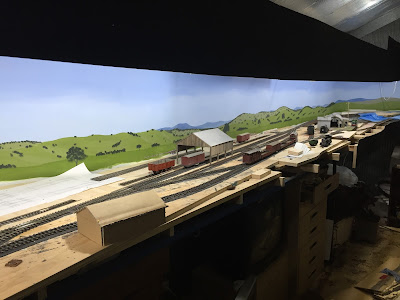 I have also been painting the facia black which has helped frame the layout. On the topic of lighting I was very interested in Dan Pickard's post on his blog Somewhere on the workbench Dan is using standard LED globes and I liked the fact that they are a light that is easily available and should be in the foreseeable future. I bought a couple daylight globes from Bunning's to try and as very impressed. I ended up lighting the whole of the interchange town with them. They are lightweight, don't generate heat and use considerably less energy than the fluorescents. Thanks Dan for trying them out first! I am planning to convert the whole of the layout to LED's as time and funds allow.
Cheers
Murray