I am making good progress on the new layout. I have about a third of the benchwork up and I have been able to reuse two yards from the old layout. It has saved quite a bit of work even with modifying them. This has allowed me to lay track between the two and run a train.

This layout will differ from the old one, in that I am also going to have some broad gauge trains running on the layout and interchanging with the narrow gauge. In a new layout I saw the opportunity to add some of the things I like about trains, that the narrow gauge doesn't give me. The layout will still be modelling the Victorian Railways, sometime after 1945 but the interchange and branch will be freelanced. I gave serious consideration to modelling the Walhalla line, but in the end my desire to include elements from the other 3 VR narrow gauge lines as well as buildings I like from my local area won out.

I have plans to have a roundhouse & turntable similar to Moe. I will also have a number of sidings with industries that will give me a variety of wagons that aren't used on the narrow gauge such as tank wagons. There should be a role for someone to be the broad gauge operator when I get to being able to hold operating sessions. Their role will include shunting both the interchange and the sidings and maybe running the passenger train. I am getting ahead of myself here, and all of that is a long way into the future. 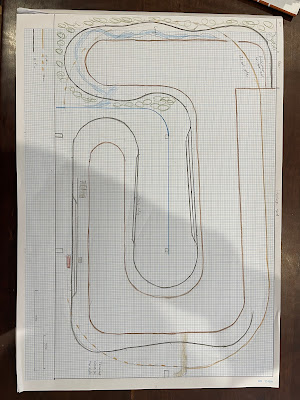 This is the concept drawing I did to see if the design would work, for both the train and operators. I haven't drawn the interchange station and the yard layouts are a simplified attempt to see what fits. The aisles are also drawn with straight sides because that is an easy way to draw it. In reality the aisles will have curving flowing edges and the track will also wander and not be parallel with either the walls or the aisles. The 32mm gauge track does chew up a lot of space with its 1800mm minimum radius. I have kept it to the outer walls with staging under the first town on the narrow gauge. In reality only the interchange town part of the broad gauge will be visible with the rest hidden. I will also need a lift up gate for it. It isn't ideal but visiting a friends layout where he has successfully used a lift up section has shown it to be a viable option. 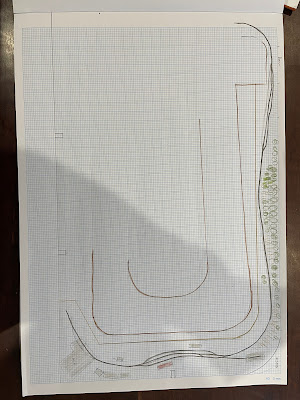 As I have a smaller space for this layout, I needed to make it multi deck to be able to fit all that I wanted. I have tried to minimize how much the second deck covers and the terminus is over an area that doesn't have a yard underneath. It will be a tall layout with the terminus set at 1500mm above the floor. The interchange station is at 1000mm, so the narrow gauge has quite a climb. The highest point of the layout will be a nod under at the entrance door at the top right of the plan. The layout will be around 1650mm high here so most people should be able to get in without any issues.

I am really happy with the design that was developed with the input of a number of friends. Their help has given me a much better design than I had come up with by myself. I am excited about the scenery and structures that I will be able to build on this layout.  I haven't been able to save any of the scenes from the old layout, but I will be able to reuse most of the buildings and scenery items like the trees. While part of me is sad, I knew from the beginning that I didn't have the room to move any of the layout without compromising the new layout. I see it as an opportunity to build it better and create new scenes that I like just as much as the old.

As for names, I am still working them out. I know the new layout won't be called the Bogong & Geehi. I will retire that name as a recognition of the old layout. I am pleased with what I achieved on that layout and I hope I can do just as well if not better on this new one. I haven't even decided on town names, but they will come in time

Posted by Murray Scholz at 6:08 PM